Why don’t we see many Diesel Hybrids on our roads?

Since hybrid vehicles arrived on our roads, motorists have wondered why they always seem to be paired with a petrol burning engine instead of diesel.

After all, the idea makes sense. Electric motors are very efficient, and diesel engines give you better miles per gallon than a petrol engine, so why not create a hybrid of the two? Surely this would be the most efficient vehicle on the market!

However, upon further inspection, it doesn’t seem to be so simple.

What is a hybrid vehicle?

If you’ve driven on a UK road in the last decade, you’ll definitely have seen a hybrid vehicle. In fact, they have been around since the late 90s, but weren’t too common back then. They are now becoming a popular solution to the problem of pollution in this country.

Furthermore, their popularity is likely to increase further with the government’s announcement of the ban on sale and production of ICE cars from 2030.

A hybrid vehicle uses more than one means of propulsion. The most common example of this is a vehicle that uses both an electric motor and a petrol engine to power it. The electric motor is used at lower speeds, making it very efficient for driving in traffic when you are stopping and starting. The petrol engine takes over at around 15mph, when the vehicle is already being accelerated.

There are multiple types of these vehicles, such as a Parallel Hybrid, Range Extender or a Plug-in.
A hybrid vehicle is a great option for drivers who are not yet ready to transition to a fully electric vehicle.

Why aren’t there many diesel hybrids?

Most of the hybrids you’re likely to encounter use a petrol engine. Considering that diesel is more efficient, it’s worth investigating why they aren’t paired with an electric motor.

There are three main reasons why we don’t see diesel hybrids.

Therefore, combining these two engines would result in an incredibly pricey vehicle. This wouldn’t necessarily be a problem for some, but would the extra cost be worth it?

Another advantage of a petrol hybrid is the way the two engines complement each other.

A petrol engine outputs the most power at higher speeds, whilst an electric vehicle delivers the most torque at lower speeds. This means that when the vehicle is moving slowly, the electric motor is driving it forward. When it speeds up, the petrol engine is designed to handle the higher speeds with great efficiency.

However, a diesel engine is also great at producing torque lower down. So, when paired with an electric motor, there is actually less efficiency. Both motors are fantastic at low speeds, but would need some serious engineering work to make them work as well at the higher speeds. 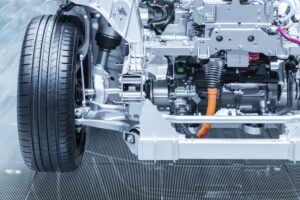 There is simply less demand for a diesel vehicle to be hybridised.

Petrol engines are able to convert 25% of their fuel’s energy into kinetic energy, which moves the vehicle forward.

Diesel on the other hand, is more efficient overall. Some diesel engines can convert 10% more than this.
This begs the question then – why would we need to hybridise a diesel vehicle if it is already more efficient?

There is not much that adding an electric motor would do to improve the vehicle’s performance and efficiency. It would be more expensive, but would offer a smaller improvement.

Despite all the reasons listed above to avoid creating a hybridised diesel vehicle, there are a few on the market.

The Mercedes E300de, the Peugeot 3008 and the Citroën DS5 are all diesel vehicles supported by an electric motor, though they are built in various different ways.

Could your fleet be using hybrid vehicles?

If you’re wanting to help the UK reach its climate goals, moving away from internal combustion engine vehicles is a great start. However, the prospect of moving straight to electric vehicles can be quite daunting as they require a whole new set of skills to manage.

However, a hybrid vehicle bridges the gap between electric and ICE vehicles. You’d still be refuelling the vehicle in the same way, but you’d definitely be starting your journey towards net zero.

As the transportation industry continues to evolve, it’s important to keep an eye on your costs. Keeping your fuel costs low is especially important, especially during rising prices.

Get in touch with Fuel Card Services today. You could save up to 10p per litre on fuel with one of our branded fuel cards, and our range of fleet management services offer other ways to save time and money.