How the semiconductor shortage has impacted vehicle manufacturing

The world is in the midst of a huge semiconductor shortage that has the potential to wreak havoc on vehicle manufacturing. What started as a temporary delay has escalated quickly.

But why has this shortage affected the world of vehicle manufacturing so strongly?

What is a semiconductor chip?

The semiconductor chip is found in a huge number of electronic devices. From TVs to computers to cars to phones; they all require these chips. Almost every industry in the world uses and relies on a steady supply of them.

Chips are essentially the “brain” of any electronic device. They are made from silicon, which is one of the most abundant elements on the planet. The first silicon transistor was built in 1947, and since then, the chip industry is now worth £410bn.

So why is there a semiconductor shortage if the materials required are so abundant, and why is vehicle manufacturing being stunted as a result?

Why is there a shortage?

There are a number of reasons attributed to the shortage. However, the size of this shortage is down to the Covid-19 pandemic.

There was a blip in the manufacturing of semiconductor chips when the pandemic hit. Supply issues and temporary factory shutdowns caused what was expected to be a temporary delay.

However, the pandemic brought with it an unexpected side effect. With many of us being instructed to stay at home, whether that be to work or not, we all found a new level of reliance on our digital devices. The result of this was a 15% increase in demand for semiconductors; a demand that the industry is struggling to keep up with.

Why does the semiconductor shortage affect vehicle manufacturing?

Think about your own vehicles – how much technology do you have on your dashboard? Do you have a built-in sat-nav or digital speedometer? Both of these things require the semiconductor chips that manufacturers are struggling to get their hands on. Even your radio will have one!

Then consider the more tech-heavy vehicles. In many modern vehicles, systems such as traction control, emissions, cruise control, fuel injection and much more are handled by a computer. The same goes for electric vehicles, which are fitted with state of the art technology to control its many different systems. They are becoming more popular each year, but it is questionable whether manufacturers will be able to maintain this steady increase in production if they can’t get their hands on the needed materials.

Depending on the complexity of the vehicle, there can be anywhere between 50 and 1000 semiconductors used in their design. 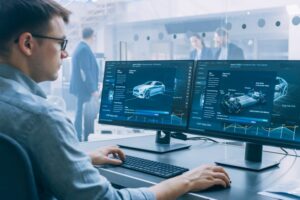 What implications does that shortage have?

The result of the shortage is a sizeable delay to vehicle manufacturing. Delivery times for many cars has jumped from 3 months to 6 months. Furthermore, new models of vans are thought to be delayed until 2022 the earliest.

Ford, for example, have been cutting shifts at production factories around the world. They reported that they expected to lose as much as half of all planned production in the second quarter of 2021, and their profits could be hit by up to $2.5bn by the end of the year. One of the factories facing cuts is one that produces highly profitable pickup trucks, which will contribute greatly to their losses.

Countries such as Japan and China have recently experienced a huge drop in production. China saw a four-month low, and Japan saw the biggest monthly drop in a year.

We could see an increase in the car prices, or begin to see vehicles without as many gadgets installed as we are used to. Manufacturers are having to discern which vehicles they need to prioritise. With a limited number of chips, they need to focus on the vehicles with the most demand. On the other hand, with manufacturers being encouraged to meet emissions targets, they may choose to focus more on hybrid and electric vehicles instead.

With this in mind, it will definitely pay to keep your vehicles well maintained for the duration of this shortage. Having to replace an old vehicle during a time where vehicles are no being manufactured quickly enough could be a very slow process indeed.

Get in touch with the team at MyService.Expert, and see how you can simplify your company vehicle maintenance.