Is there a use for PLVs in your fleet?

PLVs are becoming a more attractive option both for personal transport and commercial use. This is, in part, because improvements made to electric vehicle technology in recent years could hugely benefit the environment – but they could also have practical advantages over potentially larger, clunkier vehicles when it comes to urban mobility.

As fleet operators of all shapes and sizes start to question the role of PLVs in society and within commercial fleets, we’d like to shine a light on everything PLVs to help contextualise how they’re impacting transport today.

What is a PLV?

For starters, a PLV is a Powered Light Vehicle. This term simply describes two, three, or four wheeled vehicles that are used to transport cargo or passengers. When compared with Light Commercial Vehicles (LCVs) or Heavy Goods Vehicles (HGVs), they’re significantly smaller, weigh less, and are consequently much better suited to urban areas.

Increasingly, advances in electric technology mean that PLVs available in market today often come in fully electric or hybrid models, which reduce or eliminate the carbon impact of these much-needed vehicles. This matters to businesses, partly because the correlation between carbon emissions and global warming is hugely in the public eye, but also because its possible legislation will be announced in 2021 around introducing a cost of carbon.

If, or when a cost of carbon is announced, the need for a long-term, sustainable business strategy will quickly increase for UK fleet operators – and so PLVs could play a major role in saving costs and protecting the environment in future.

The benefits of PLVs for commercial fleets in particular go beyond sustainability, though. There’s also the practical nature of having access to more compact vehicles that can access urban areas without becoming a source of congestion to consider. For those operating fleets within cities, having two-wheeled electric vehicles that can niftily dart around to safely make deliveries in heavily populated areas could reduce transit times for cargo substantially.

Sometimes personal cars just aren’t practical, and so the lower transit times that PLVs can bring to the table typically mean that either less vehicles are needed to move cargo, or that growth opportunities appear as fleets find themselves with more and more availability.

The disadvantages of using PLVs commercially

We’ve reached a tipping point where electric technology is of a sufficient quality to make PLVs commercially viable. That doesn’t mean, though, that the technology is perfect.

Fleet operators must take the time to carefully consider whether replacing their existing vehicles with PLVs makes sense in terms of:

Some PLV manufacturers build their vehicles to match existing crash specifications regardless, but this technically isn’t a legal requirement just yet – which could bring about a backlash from drivers or pedestrians as these vehicles are brought into a fleet. 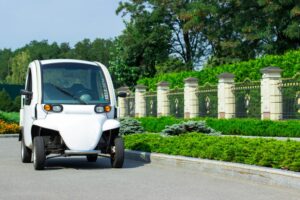 Should I make PLVs a part of my fleet?

To answer this question properly, you’ll have to conduct a thorough analysis of your current operations, and the logistical impact of introducing PLVs to your fleet. Some key things to consider though, are:

Will introducing PLVs be cost-effective?

The government has run various consultations on how a cost of carbon could be introduced via new tax laws. With the UN Climate Change Conference set to happen in Glasgow, November 2021, we may see some concrete plans or international agreements about how carbon should be taxed that have a real-world impact for UK fleet operators in coming years. Definitely one to mark in the diary.

Are you actively utilising your vehicles’ maximum capacity?

If you’re in a position whereby you’ve known for a while that your larger vehicles are constantly being underutilised, with either passenger space or cargo space remaining empty, then PLVs really could be a game-changer for your fleet.

It’s expensive to fuel medium to large-sized vehicles, given their weight, and so if you spot an opportunity to switch out some of your current vehicles for PLVs, you may find yourself reaching 80-90% capacity during commercial transit, rather than 60-70%. Again, it’s key to consider the long-term impact of this efficiency on your business’ profitability.

How long are your delivery routes?

PLVs simply aren’t well-suited to lengthy delivery routes. If you’re travelling from Scotland to Lands’ End, you’re probably going to be better served by innovations in the electric HGV market that will inevitably become commonplace.

However, if you’re frequently conducting last-mile deliveries, then the quiet, low-carbon footprint advantages of electric PLVs could well be relevant to your operations.

How could Fuel Card Services help?

As we see the light commercial usage of PLVs, the quality of electric technology (which currently limits PLVs to an operational range of around 200 miles), and low-carbon initiatives become more prevalent, fleet operators may do well to seriously consider the role PLVs could play in their operations.

In the meantime, fleet operators should take every opportunity available to them to make efficiencies within their current business models. That could mean getting access to cheaper fuel via the right fuel card, or utilising a range of fleet services such as advanced telematics to overcome specific operational challenges.