What happens when you put the wrong fuel in your car?

So, you’ve put the wrong fuel in your car. It’s a surprisingly easy mistake to make that plenty of drivers have made. In fact, What Car? suggests that someone puts the wrong fuel in their car every three and a half minutes in the UK!

If you have put the incorrect fuel in your tank, acting quickly and effectively to resolve this issue is essential- as failure to do so could cause lasting damage to your vehicle. So, what are the next steps?

The impact of misfuelling your car engine

The most important thing to do when you have misfuelled is to not start the engine under any circumstance. Starting the car when it has the incorrect fuel in the tank could cause lasting, costly damage. The AA suggests that you remove the keys from the ignition immediately.

How much can it cost if you’ve put the wrong fuel in your car?

If you haven’t yet started the engine, the cost of having a specialist drain the fuel tank will be around £190, but if the engine is ignited it could be closer to £5,000.

Once your vehicle is in an appropriate location, call your breakdown provider immediately. They’ll have specialists available to drain your car’s system and make it safe to refuel again.

The impact of different fuel types on different car engines

Different types of fuel have different properties and can have varying effects on a car engine. Watch out for:

Putting petrol in a diesel car

It’s incredibly easy to put petrol into a diesel car due to the size of the nozzle, however it’s unfortunately also incredibly damaging to do this. What’s absolutely essential is that if you’ve made this mistake, do not start your car’s engine.

If you were to start your engine, you would likely hear a loud knocking sound when accelerating. That’s if your vehicle even starts! If it does, you’re unlikely to get far – and it’ll quickly become clear to you that something is critically wrong.

That’s because diesel acts as a lubricant that helps the fuel pump work as it should. Petrol, however, will increase the friction in your diesel engine meaning the fuel pump is going to meet some heavy resistance and become damaged. You could be looking at having to replace the fuel pumps and other components, or even replacing the entire engine if the petrol is allowed to wreak enough havoc on your vehicle.

What if I have only put a small amount of petrol in my diesel engine?

If you’ve put an absolutely miniscule amount of petrol in your engine, there is a chance it could run smoothly without you noticing the impact. However, our recommendation would always be to have your tank properly drained. The risk of paying to have an engine repaired is pretty substantial, so paying up a small fee to drain an engine is probably a wiser decision in the long run.

Putting diesel in a petrol car

You’ll struggle to fit the diesel nozzle into a petrol car, so the chances of this happening are much less likely. However, there are some instances where this accident can happen.

Putting diesel in a petrol car also causes less damage to your vehicle. The diesel fuel will actually just clog up the system rather than causing any lasting damage.

You may quickly become aware that you’ve misfuelled your car as your engine starts to misfire – and there’s a good chance your vehicle won’t start at all. However, once the fuel is drained from the system, you can put petrol back in and everything should work as normal!

E10 in an incompatible vehicle

In 2021, the UK transitioned from E5 to E10 petrol. This fuel contains 10% renewable ethanol, whereas E5 only contains 5%. This has helped the country take steps towards reducing CO2 emissions – it’s the equivalent of removing all the petrol vehicles out of North Yorkshire!

However, some older cars are not compatible with E10. It’s estimated that around 600,000 cars on UK roads will not accept it.

Luckily, putting E10 in an incompatible vehicle shouldn’t cause too much damage. If you were to do this repeatedly, your vehicle’s internal structure could suffer due to the bioethanol’s corrosive properties.

You can also mix E10 and E5. Therefore, if you end up with E10 in your incompatible vehicle, get some E5 in there as quickly as possible. 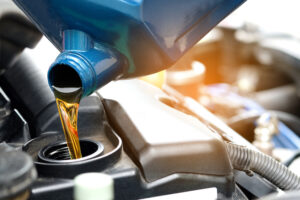 How can drivers avoid misfuelling in future?

When drivers put the wrong fuel in their vehicle, it’s usually because they just aren’t paying attention! This is easily done after a long day of work or an early start to the day.

Remember that the colour of the hose and nozzle isn’t always consistent. If you’re at a fuelling station that you aren’t familiar with, don’t just pick up the hose that is the colour you are used to using. Be sure to read the signage properly – the pump should specify whether it is petrol, diesel, or something else.

The AA suggests putting a reminder on the inside of the fuel cap to double check that you are using the correct pump.

As with driving, try and minimise distractions. It’s easy to be in autopilot whilst refuelling, but you don’t want to look up from your phone only to realise you’ve had the wrong hose inserted into your vehicle!

You never know when an accident such as misfuelling is going to wreak havoc on your vehicles. It is therefore vital that you have some form of maintenance plan in place. That’s where MyService.Expert comes in.

With MyService.Expert, you can simplify your business’ vehicle maintenance with pre-negotiated rates at thousands of main dealer and independent garages, all across the UK.

Get in touch today and find out what we could do for you.