Fuel plays a major role in the UK economy. It’s a core component of the transport sector, which saw 176 billion tonne-kilometres of domestic freight transported in 2020. A whopping 77% of that freight was moved by road, and is the product of operations conducted by businesses of all shapes and sizes – from large multinational corporations to SMEs that are just starting out on their journeys with commercial freight.

All of these freight businesses, and even transport businesses such as taxi ranks, share at least one trait in common, which is a dependency on fuel. Consequently, it’s important to understand:

That’s what we’ll cover in this guide, as we dive into all things fuel related.

Firstly, then, what do we mean by ‘fuel?’ Well, fuel is quite simply a material burned by a vehicle engine for power. Better quality, cleaner fuels may enable cars to run a little more efficiently, travelling that bit further than cheaper fuel counterparts, but these typically come with a higher price tag attached.

So, navigating the fuel landscape and determining which types of fuel to purchase could have a massive impact upon your business’ bottom line. For example, would it be smarter to invest in diesel-powered company cars than petrol alternatives? Or is electric the way forward?

To help make a decision, let’s break down the different types of fuel.

The main types of fuel utilised by UK fleets are:

Unleaded petrol is the most common type of fuel you’ll find powering vehicles in the UK, and in the wider western hemisphere. It’s most commonly available in three main variants:

Modern petrol variants are a drastic improvement upon the older lead-based petrol that was a staple of fuel stations, and they present a range of options for powering company cars and fleet vehicles.

Also worth mentioning is diesel, which is widely known as being more fuel efficient than petrol. That’s because diesel is comprised of more long-chain hydrocarbons than petrol, meaning it’s packed with energy – which works at around 15% more energy per litre.

Fuel economy is crucial to the success of commercial fleets, and so diesel could be considered an attractive option for vehicles transporting freight at high speeds over long distances – especially due to the extra torque drivers can feel from a diesel engine.

That said, there have been concerns shared around the potential dangers that diesel fumes could pose to drivers, which some suppliers have disputed, but either way it’s worth looking into diesel as an efficient, if a little expensive, fuel source for commercial vehicles.

However, there’s a new type of fuel that’s sweeping the UK market. That’s electric power – which can be generated either via public charging stations, or standalone charging points that are installed either at fleet depos or even residential houses.

There are some obvious and attractive benefits to electrifying a commercial fleet, including:

Which type of fuel should I use for UK company cars and fleets?

So, which fuel type should you choose for your commercial fleet? 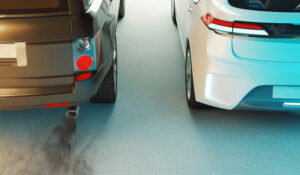 It’s a difficult question to answer, however there are a few key elements to this formula that apply to the vast majority of fleets. You could proceed by:

There could be cost-saving advantages for fleets that are willing to electrify and embrace sustainability with a positive and open mindset. This is partly due to the government grants and subsidiaries available for SMEs that invest in low-emission plug-in vehicles, and partly due to the operational advantages of building an electric infrastructure gradually – which enables companies to start taking orders as soon as EVs are purchased.

For example, it’s worth considering the time required to install EV charging points. With this technology already proving fairly affordable for fleets, it may be wise for SMEs to set up charging stations within depos in the near future. This may mean that any EVs purchased later down the line, when the tech becomes cheaper and more available, can be utilised quickly – while avoiding premiums for charging point installation that may come about as competitors rush to electrify.

Additionally, showcasing your business’ openness to and use of electric power could help you build strong relationships and with customers and suppliers who share those same sustainable brand principles – or unlock new partnership opportunities.

At Fuel Card Services, we specialise in helping businesses save money on their fuel costs. We do this in a number of ways, from offering a range of branded fuel cards that can make a real impact to your bottom line for every mile driven by your team, to offering an advance suite of fleet services that are designed to help your vehicles and operations run more efficiently.

For example, our MileageCount software and advanced telematics service can be used to properly track your driver’s routes, and plan routes efficiently – which is a prerequisite to calculating the fuel demands of your fleet. Additionally, our fuel cards can get you access to virtually any type of unleaded or diesel fuel at almost any pump across the UK – all you need to do is identify the right fuel card for you – which our experts can support with.

If you think your fleet could benefit from our cards and services, get in touch today and see how we could help you.