There’s a vision shared by tech industry leaders, environmentalists, and governments around the world to replace our current vehicles and infrastructure with more sustainable electric equivalents.

Closer to home, the UK government is in fact committed to a net-zero carbon emissions transition by 2050. So, electric vehicles are inevitable – but what’s the most effective way of powering them, and could electric roads be viable source of power?

The core challenge with powering electric vehicles that we’re already experiencing, and may face for years to come, is battery life. Most electric vehicle batteries on roads today are rechargeable lithium-ion batteries.

These are effective at storing electricity, but the sheer amount of power needed to keep an electric vehicle going for hours is enormous. If we build larger lithium-ion batteries, then we’ll face longer battery charging times, and deplete our natural resource of lithium.

Green Tech Media investigated whether our current reserves of lithium can be scaled to meet the increasing demand for batteries driven by companies like Tesla, who want to introduce ‘Gigafactories’ capable of producing millions of battery units at speed. Their conclusion was ‘not just no, but hell no’.

So, we’ll need a breakthrough in electric battery technology, or an alternative source of energy to guarantee the future of electric car production – which is likely to become more pressing as more legislation is introduced to promote the use of sustainable energy sources. One of those alternative energy sources could be electric roads.

The basic premise for electric roads is incredibly simple; the road infrastructure is responsible for supplying electricity to all vehicles using the road at any one time. Typically, this is achieved via either overhead or underground power lines, which transfer power directly to vehicles via inductive coils, or conductive rails.

Within most electric road systems actively used in the world today, overhead powerlines are limited to commercial use, while ground based power systems are estimated to be the most cost-effective by experts.

You can find electric roads in:

Sweden have outlined a plan and drafted a map to enable national expansion of the electric road system, which is suspected to require electrifying around 20,000km of road in order to meet a target of reducing domestic carbon emissions by 70% (by 2030).

So, electric roads are in fact a reality in the world today. They’re also being considered in the UK.

The UK’s stance on electric roads

The UK government funded a study to gauge how cost effective it would be to implement an overhead electric cable system that powers road-using freight vehicles. They estimated the total cost of this ‘E-highways’ system would amount to £19.3bn, but that it could also pay for itself within 15 years, while drastically cutting carbon emissions. 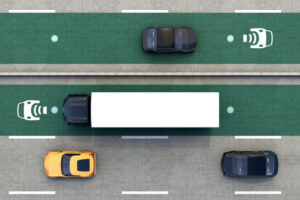 For the commercial fleet industry, such a system could have huge repercussions. Fleets that adopt electric technology quickly and mitigate their carbon impacts could avoid the costs brought about by future legislation, such as a potential carbon emissions tax. There are also projects in the works to examine the potential impact of electric roads on consumer vehicles.

Highways England begun considering and testing electric road technology in 2015, in a project that was later cancelled in 2016 due to budget limitations. However, the infrastructure that was examined is very similar to the South Korean technology introduced back in 2013 and could make a resurgence. In Highways England’s system, electric cables buried beneath these roads generate an electromagnetic field, which is absorbed by a coil placed within each electric vehicle to wirelessly transfer power.

EV safety matters, so it’s fortunate that this technology is also proving to be completely safe to pedestrians and road users alike. The total voltage output of this system at surface level is around 1 volt, meaning you wouldn’t feel the electric current even when walking barefoot.

There seems to be a very strong consensus amongst studies that electric road systems would be significantly cheaper to introduce than a national network of charging stations and larger batteries for EVs.

The former could even cost around half the amount, according to findings from the Swedish ERS study we touched on earlier. Obviously, electric vehicles will still need to be equipped with batteries even when using an electric road system. However, the total battery capacity could be reduced by around 80% when compared to a system that solely utilises charging stations.

That’s a huge saving, which could prove to be a sustainable option that mitigates the lithium resource challenges we’re facing, while also proving safe and effective for road users and pedestrians alike. For more insights on this topic, read our article on how the cost of electric cars compares to petrol equivalents.

What does this mean for commercial fleets?

As a commercial fleet operator, you may want to keep your eyes on the latest developments in electrification. Realistically, it’s likely to be a good few years from now (2021) before we see this technology implemented at scale throughout the UK, however businesses that capitalise on the advantages the technology could bring and modernise their operations accordingly could gain an edge over the competition.

In the meantime, fleet operators should take every step possible to become more efficient and save money on fuel costs. That’s where the team at Fuel Card Services can help. We supply fuel cards from a range of market leading brands, across networks covering the whole of the UK. Check out our fuel card offering to see whether your drivers could be paying less each time they stop for diesel or petrol. Additionally, we do offer an electric vehicle fuel card from Shell, meaning the savings don’t need to stop when you get behind the wheel of an EV!

There are also efficiencies to be made within fleet servicing, for which we’ve designed a set of services that can make fleet management that little bit easier. From advanced telematics to fuel-pump locator apps, we can help you become more efficient.