Which UK motorway is the safest to drive on?

Motorways make up 13% of roads in the UK, with many drivers travelling on them multiple times per week. Which motorway is the safest to drive on in the UK, and which ones might be worth avoiding?

Whilst it is interesting to understand which roads are statistically the safest, it’s generally understood that the UK is a very safe place to drive.

Thankfully, the number of road traffic deaths have fallen drastically since the early 2000s. The EU unfortunately saw 54,900 road related fatalities in 2001, but this figure has more than halved since then.

Thing like mandatory speed limiters should make driving even safer in the coming years. However, most road traffic accidents are linked to some form of human error.

Which motorway is the safest in the UK?

Despite the high speeds and high volume of traffic, motorways are considered to be the safest roads in the UK.

New drivers are often anxious about driving on them, simply because they are not taught how to do so during lessons. In fact, a large number of drivers plan their routes so that they avoid motorways, even if the drive will be longer.

However, drivers around the East Midlands area might be pleased to know that the M42 is considered to be the safest UK motorway.

This stretch of road runs from Bromsgrove in Worcestershire to Ashby-de-la-Zouch in Leicestershire, circling the underside of Birmingham.

The M42 is a relatively simple stretch of road, and is around 40 miles long. This is quite short compared to the M6, which is the longest motorway in the UK, stretching over 230 miles from the Midlands to the border of Scotland.

Interestingly, some sources site the M621 as being an equally safe stretch of motorway. However, another source argues that it is a hotspot for accidents. The worst stretch of this road is between J2 and J2a in Leeds.

Which motorway is the most dangerous?

At the other end of the scale, there are certain stretches of motorway that account for a large number of accidents and fatalities.

The M1 on the other hand had fewer accidents with 7,617 reported during the same time period. However, it is the deadlier of the two motorways. 154 fatalities were reported as a result of these accidents.

The M6 saw 160 deaths during that time period, which arguably makes it the most dangerous motorway in the UK. However, since it is the longest, it may just be that there is more room for error along the 230 mile road. 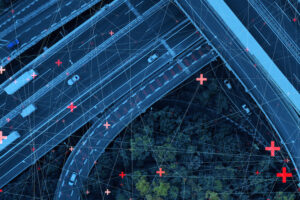 First introduced in 2006, a smart motorway aims to reduce congestion. It does this by using applying speed limits when there is a high volume of traffic, or using the hard shoulder as another lane.

Certain motorways have scrapped their hard shoulders in place of a permanent extra lane. Others still operate with the gantry signs dictating whether the lane can be used for driving or not.

Statistically, a smart motorway is actually safer than a normal one, perhaps because of the increased capacity they offer.

However, accidents over recent years have sparked serious debate over their safety. It’s argued that removing the hard shoulder causes a great deal of accidents.

In one instance, two drivers pulled over to exchange insurance details after a minor collision. However, the hard shoulder was being used as an extra lane. A lorry driver using said lane failed to see the obstruction, which resulted in a fatal collision.

A survey by the RAC shows that nearly 70% of drivers believe the removal of hard shoulders to be unsafe. However, it could just be a case of taking the time to become used to this new feature on our roads. After all, drivers are familiar with the hard shoulder, and it might just take some time for drivers to adjust.

Keeping your vehicles well maintained is key to motorway safety

Even if you were driving on the safest motorway in the UK, having a poorly maintained vehicle will still increase your chances of breaking down or having an accident.

Drivers of HGVs must do walkaround checks of their vehicle before every journey. By doing so, they are ensuring their vehicle is in good condition and driving it won’t put other road users in danger.

With MyService.Expert, we make vehicle maintenance easy and painless. You’ll get access to pre-negotiated rates with thousands of nationwide dealers and garages. You also can manage your maintenance from the online portal, as well as set reminders and alerts so you never forget when you’re vehicles need a service.

Get in touch with Fuel Card Services today, and see how we can keep your costs low and your drivers safe!