What are the major causes of road accidents in the UK?

There are tens of thousands of road accidents in the UK each year; the causes of which are well documented by police that attend the scene.

With such high numbers, it is important that drivers understand the reasons for accidents and collisions so that the roads become a safer place for everyone.

The top 5 causes of traffic accidents in 2019

Whilst these numbers look incredibly high, they are in fact the lowest they have been since 1979. It can be assumed that the amount of car accidents in 2020 were even lower, due to a huge number of people staying at home rather than being on the road.

With life returning to normal, however, our roads are becoming noticeably busy again. Drivers should take note of the main causes of accidents to continue the downward trend.

39% of UK road accidents in 2019 were due to the driver or rider not sufficiently observing their surroundings. This makes it the most common reason for collisions, but is equally the most preventable.

This could be due to tiredness – we’ve all seen the “tiredness kills” signs on the road, and this isn’t an exaggeration.

Commuters might also become overly familiar with their route. With familiarity comes complacency. They may not feel the need to concentrate as they have done the journey hundreds of times with no problems, why stay alert now?

This is a huge problem in congested areas such as Greater London. In HGVs, it might not even be possible for a driver to properly observe their surroundings with all the blind spots found in larger vehicles like this. TFL have introduced the Direct Vision Standard, which ensures visibility and awareness in HGVs. If a vehicle does not meet the standard, additional cameras, mirrors and sensors need to be installed to improve driver awareness. With this standard in place, it is hoped that commuter deaths and injuries will be a thing of the past by 2041.

Driver failed to judge another person’s path or speed

21% of the UK’s accidents occurred as a result of a poor judgement. For example, a driver at a junction might see another car coming but thought they had enough time to pull out. Or a driver at a roundabout might assume an oncoming car is turning when, in fact, it isn’t.

There’s a fine line between anticipating a driver’s next moves and making reckless assumptions. If the incoming vehicle is not indicating, do not assume it will deviate from its current course. The highway code suggests that, if unsure, simply wait for a safe gap. If you pull out and cause another vehicle to have to slow down or stop, you have placed other road users in danger.

Driver was careless, reckless, or in a hurry

17% of UK road accidents were caused by drivers were not driving to the best of their ability. Sometimes this is for reasons such as being late for work and going too fast. Driving too close to the car in front is also the cause of many accidents.

It is important to remember that, despite any pressure on you to be on time, nothing is worth you putting lives at risk to be on time.

On the other hand, a portion of these accidents can be attributed to drivers being on their phones, or just not paying attention to the road for other reasons. Heavy fines are in place to stop this behaviour, and tighter laws are expected within the next few years. 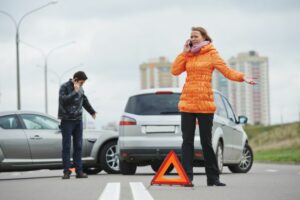 12% of UK road traffic accidents in 2019 happened due to poor manoeuvres.

This doesn’t necessarily mean that the drivers were being reckless. They may have misjudged the speed at which to approach a turning and caused a collision. Or, if a driver turns too late, they don’t leave themselves enough space to turn into the road and could hit another vehicle, or even a pedestrian on the pavement.

Perhaps this statistic accounts for accidents that occur in car parks. Trying to back into a spot and hitting an adjacent car could definitely be defined as a poor manoeuvre.

Unlike most of the other causes, this one is difficult to find a solution for, other than simply encouraging extra vigilance during circumstances where such manoeuvres could cause an incident.

11% of reported accidents happened after a driver lost control of their vehicle. This is often caused by dangerous weather conditions such as heavy rain or ice.

It is important to remember that, during these conditions, your vehicle will not be able to brake as efficiently as you are accustomed to. Driving too fast in certain wet conditions can cause aquaplaning. You may not be able to steer and your brakes might cause you to skid.

In these conditions, it is advised that you drive at a much slower speed than usual. This will allow you to maintain greater control over your vehicle.

If you experience a front wheel skid, do not try to straighten the wheel. Keep the steering wheel in turned towards the direction of the skid. Release the accelerator and do not attempt to brake.

In the event of a rear wheel skid, you need to steer towards it. If your vehicle slides to the left, steer to the left as a response. Again, keeping your foot off the brake is paramount in these situations.

What should I do in a car accident?

If you are involved in an accident, it is vital that you stop your vehicle when it is safe to do so. Failing to do so is a criminal offence and could be viewed as an admission of guilt.

The police must be informed if:

GoCompare suggests that apologising to other drivers involved is not a good idea. Whilst polite, it could be viewed as an admission that the accident was your fault, even if it wasn’t. 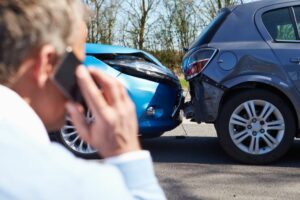 Information must be shared between all those involved. Do not leave the scene of the incident without having given and received the following information:

If there were any witnesses to the accident, be sure to collect their contact details too as the information they hold may be vital when dealing with the insurance claims.

Make sure to get in touch with your insurer within 24 hours of the accident. Otherwise, your insurance may be invalidated.

Using telematics to reduce accidents in your fleet

As a fleet manager, it’s fair to be concerned about the implications of your vehicles being involved in accidents. If they are damaged, they will spend unscheduled time being repaired, slowing productivity.

However, if your vehicles were fitted with telematics, you’d be able to see when your drivers have developed habits such as speeding, aggressive turning or sudden braking. From here, you can train drivers to correct these habits. This will not only reduce risk of vehicle damage, but help to keep your employees safe, along with other road users.

EV batteries: from start to finish

Unlike the combustion engines that put petrol and diesel vehicles in motion, electric vehicles operate with the power of lithium-ion batteries - and many of them. Sharing technology with common...