The Workplace Parking Levy: A new reality for road users?

For many businesses, being able to provide free car parks for employees has been a standard perk over the years. However, as part of a new push to ease congestion and save the environment, this could soon become a thing of the past in some towns and cities.

Instead, a new licensing scheme called the Workplace Parking Levy (WPL) may come into force. But how will it affect drivers and fleet managers? Let’s take a closer look.

What is the Workplace Parking Levy?

The WPL is a pioneering new initiative that will charge employers and education providers for the number of parking spaces they regularly offer to their users. This fee can be up to £750 per year (although it is typically much less) and it can either be absorbed by the employer or passed on to space users.

The aim is to encourage more commuters to use alternative means of transport rather than their cars. By law, the revenue raised through the WPL must be put back into improving local transport links.

It is hoped that as this funding grows through workplace parking legislation payments, everyone will be able to access low-carbon travel options and reduce their reliance on personal vehicles.

Benefits of the WPL for the environment

Traffic pollution is increasingly becoming a health hazard and a threat to the climate. During the first lockdown of the coronavirus pandemic in 2020, the world gained a unique insight into what cities could be like with fewer cars – and now environmentalists want to see this becoming the norm.

According to a University of York study, levels of nitrogen dioxide fell by an average of 42 per cent during the first and strictest lockdown. Meanwhile, further research from Defra suggested mean reductions of up to 40 per cent for nitrogen oxides, showing the impact of reduced traffic on air quality and carbon emissions.

This is significant, as an unacceptable number of people are currently dying as a result of pollution. World Health Organization figures attribute seven million premature deaths per year to unclean air, with 40,000 in the UK alone, according to the Royal College of Physicians.

Only radical new measures such as Clean Air Zones, Congestion Charges and perhaps the WPL are going to be enough to lower these figures and keep the UK on target to cut its carbon emissions by 78 per cent by 2035.

Which areas are considering the WPL?

As of January 2020, a number of UK cities were considering the introduction of a WPL. These included Leicester, Bristol, Reading, Oxford and Birmingham.

Scotland had also passed permission for the charges as part of a new Transport Bill in 2019, with authorities in Edinburgh and Glasgow among those considering a WPL trial there.

In London, it is hoped that introducing WPLs will contribute to the city’s goal of ensuring 80 per cent of journeys are made through walking, cycling or public transport by 2041.

Although the global pandemic put the scheme’s more widespread introduction on hold, it is anticipated that this could resume as the UK starts to bounce back from the disruption caused. 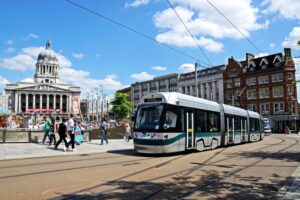 As of May 2021, the only UK city actively operating a WPL is Nottingham. Its City Council introduced the initiative in 2012, with employers that provide more than ten spaces charged £415 a year for each one.

This is operated using on-street parking operations and annual permits. So far, the WPL has raised more than £64 million, which has paid for two additional tramlines, improvements to the railway station and more clipper buses.

Nottingham now has the highest public transport use rates in the whole of Britain, something that has contributed to taking the equivalent of 2.5 million car journeys off its road networks every year.

Not only has this resulted in a 33 per cent fall in carbon emissions, but it has also led to more businesses wanting to locate their premises in Nottingham due to its improved environmental credentials.

Who is exempt from the WPL?

Although the WPL is city-wide, there are exemptions for these organisations and vehicles:

This means as many as 80 per cent of employers do not have to pay the levy. However, charges do apply for employees who drive company vehicles and take them home at night.

Since the WPL will also affect employees who drop off fleet vehicles and drive home in their own cars, businesses in areas set to be affected may want to consider schemes such as car sharing and special rates on public transport in future.

Criticism of charging for parking at work

The WPL is proving controversial, with critics arguing that public transport is too unreliable in especially rural areas for people to use public transport and therefore avoid potential WPL levies.

However, WPLs are likely to only be introduced in the largest cities, which should already have good transport links in place.

There is also an argument that electric vehicles should be exempt from the workplace parking charge as they currently are for Congestion Charges, since they do not contribute to pollution. This is not currently part of the criteria, but it may be something the government considers in future.

Although the Workplace Parking Levy has already proved successful in Nottingham, it will certainly need some tweaks and additions to help employees use greener transport methods if it is to be widely rolled out in other cities.

But as the government moves towards a more environmentally-conscious agenda, it does look as though the WPL is becoming a more likely reality for road users going forward and will therefore be something we will all need to adapt to.