While there’s currently no global standard speed limit that all countries and organisations can agree on, it’s clear that speed limits exist to minimise the potential danger to life posed by high-speed driving.

What, though, is the best way to go about ensuring speed limits are enforced? Should we trust each individual to abide by the laws of their own accord, or should we be aiming to force people to comply with speed limits through our design of vehicle technology?

This question remains unanswered, however one potential solution has surfaced which, if introduced, is likely to have a serious impact for all drivers in the UK and Europe.

What is a vehicle speed limiter?

That proposed solution is vehicle speed limiters, which utilise ‘Intelligent Speed Assistance’ (or ISA) to slow drivers down. This technology comes in two main strands:

The EU is the driving force behind introducing ISA legislation which will legally require that all new cars manufactured from 2022 include some level of vehicle speed limiter technology built in, the European Transport Safety Council announcement suggests. While the UK has departed from the EU via Brexit, there’s a strong indication that we’re likely to mirror any legislation that’s introduced very closely.

With that in mind, there can’t be any guarantees as to whether the legislation will come into place, or exactly what it will entail, just yet. We do know that there’s a demand for this legislation, as many speculate that it could assist with the introduction of self-driving cars to UK roads by giving reassurance to road users while improving safety standards.

However, agreeing on the exact terms of the legislation is proving to be problematic. Perhaps the main reason for this is that vehicle speed limiters aren’t 100% effective. With warning systems, for example, drivers will undoubtedly become annoyed by repeated audio and visual alerts – but this simply might just not translate into them actually slowing down.

What’s more, even in the case of nagging limiters, the proposed legislation indicates only that new vehicles must be manufactured with this technology in place, not that it must actively be used on the roads. Drivers would therefore be able to legally disable a nagging or warning limiter system and face no persecution, which means many drivers may still end up speeding and potentially putting lives at risk.

A decision yet to be made

It’s worth noting that the vast majority of UK car manufacturing and driving legislation is an imitation of EU legislation, which is desirable for companies trading in both economic areas given it reduces complexity in the manufacturing and distribution process. Therefore, it’s likely that we’ll abide by this new law.

However, as the legislation requires the visual warning to be placed in the direct field of vision of the driver, some electric vehicle manufacturers such as Tesla are not happy with this, as they would have to change their vehicles’ display.

ISA has many benefits, such as the improvement of fuel efficiency and CO2 emissions, detecting pedestrians, cyclists, and vulnerable users – ultimately making all road users safer.

However, there are still some limitations to the system, such as detecting speed. Temporary road works and out of date GPS mapping can show inaccurate speed signs, increasing chances of surpassing the legal speed limit.

Additionally, the European Transport Safety Council (ETSC) has said that even after the introduction of the system, drivers will still be held responsible. So, if the system detects lower/higher speed limit than allowed and drivers override it – they will be issued speeding tickets. 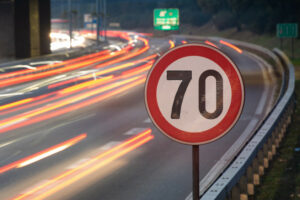 What does this news mean for commercial fleets?

If the legislation is introduced in the UK, it could have a real-world impact for fleet operators. One potentially negative impact is that the requirements for new vehicles may change, meaning operators around the country would have to ensure that any new lorries or cars purchased come with speed limiter software built in.

This would mean higher expenses, which could be a challenge at a time when fleet operators are already facing a lot of costs such as rising fuel costs due to shortages.

On the positive side though, abiding to the legal speed limits would result in a decrease in speeding tickets, less risk to drivers and less likelihood of incidents if the technology proves effective. All of this could result in less downtime for your fleet, meaning you could maximise your vehicle usage and focus on generating revenue.

We hope this blog has been useful in informing you about speed limiters, what they mean for fleet vehicles and how they’ll help fleet managers and drivers stay safe.

At Fuel Card Services, we know how important it is to track the performance of your fleet, both to improve driver safety and vehicle security. That’s why we have developed Tele-Gence, our advanced telematics system which enables you to install a range of cameras and trackers on your vehicles before remotely feeding data through to your team; enabling you to get a fuller picture of your operation and spot cost-saving opportunities.

The automated reported system included in our Tele-Gence service can help you flag when your fleet vehicles are being used for fraudulent purposes, monitor dangerous speeding, and gain insights into how improved driver behaviour generates sales. Every good fleet operation could benefit from an advanced telematics system, so why not not get in touch with our experts to find out how we can support you?