How many of your drivers use their phones while driving?

As a fleet operator, you may be distressed by the idea that your drivers could be choosing to use their mobile phones while on the job rather than paying full attention to the road. After all, while multi-tasking is a great skill – we’re only human and simply do not have the ability to operate a vehicle while being fully alert to road dangers, and texting or making a phone call.

The Department of Transport’s 2017 research found that as many as 445,000 drivers are using their phones while driving. Whether they realise it or not, this is simply not legal. In fact, it’s illegal to use any handheld mobile device while driving.

The relevant UK laws we can look to for guidance on the use of mobile devices while operating a vehicle are:

It’s important that all drivers within a commercial fleet have accurate and up to date knowledge of these laws to protect both themselves and other road users from harm. To check whether this is a prominent issue amongst your drivers, you could look to have an honest conversation with them, or survey them to test grey areas that help you identify whether these laws are fully understood.

Here are some questions to help get you started:

Q: Is it legal to drive while texting?

Q: Is it legal to send texts while you’re waiting at a red light?

A: No. This applies even if your engine is turned off and the vehicle is stationary. The only exception to this is if you’re using hands free communications, which are permitted so long as they do not distract you from driving.

Q: Is it legal to plug your phone into your car and charge it while driving?

Q: How can you take an urgent phone call when driving?

A: The correct way to do this is to pull over into a designated parking space, turn your engine off, apply the handbrake and remove the keys from the ignition.

What happens if you’re caught on your phone while driving?

It’s important to consider the potential implications of breaking these laws, both from a driver and company perspective.

For drivers, there’s a risk of committing prosecutable offences directly related to using a mobile phone while driving. There are also separate offences around not being in full control of a vehicle – which can apply if the driver is deemed to have been distracted by a phone in a cradle.

If a police officer sees any such offence committed, prosecution will follow – and it will result in points added onto a driver’s licence and a fine, as well as potentially more serious ramifications based on the severity and impact of the offence.

If a driver is disqualified from driving as a result of these types of offences, they’ll find themselves unable to continue driving professionally.

From a business perspective, there are practical issues associated with having your drivers disqualified. For example, it could generate a bad reputation for your business if such issues occur repeatedly and are picked up on by the media – which may impact your ability to secure contracts and bring new customers on board.

What’s more, there’s already a severe lorry driver shortage in the UK (as of August 2021) so recruiting new team members is likely to be challenging. A much better option, then, is to take steps now to improve driver safety and ensure laws are being followed by your employees. 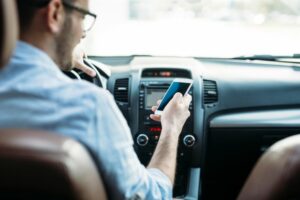 How to encourage your drivers to put down their phones

So, what practical steps can you take to achieve this within your organisation?

One final thought is that it’s simply not worth looking for ways around the existing laws. Did you know, for example, that in event of a serious accident, the police have the right to access a phone and analyse its data to determine whether the device was being used at the time of an incident, and could have therefore caused the driver to lose control of their vehicle?

How could Fuel Card Services help?

At Fuel Card Services, we specialise in supporting drivers and fleets with the right technology. Our range of fleet services is designed to you access to:

If you’re serious about bringing the right technology to your fleet, and saving costs both through tech and having the right fuel cards for your drivers, then contact our friendly experts to find out how we can support you.

EV batteries: from start to finish

Unlike the combustion engines that put petrol and diesel vehicles in motion, electric vehicles operate with the power of lithium-ion batteries - and many of them. Sharing technology with common...