Changes to the highway code in 2022

The start of 2022 saw some changes to the highway code that aim to improve the safety of pedestrians, cyclists, and horse riders.

These changes, which came into place on the 29th January 2022, bring some fairly major changes to the hierarchy of road users, and should therefore be understood by all drivers.

For fleet managers, it is vital that you ensure your drivers are in the know regarding these new rules. Failure to understand these changes could result in dangerous complications whilst out on the road.

After all, the updated code states that drivers of larger vehicles must now recognise the danger the pose to smaller vehicles, and other vulnerable users of the road.

What are some notable changes to The Highway Code?

The hierarchy of road users is a list of road users that is ranked in relation to their priority on the road. Whilst in the past, drivers of cars, vans and HGVs may have thought themselves to have priority over pedestrians or cyclists, this is certainly no longer the case.

The new hierarchy of road users is as follows:

As stated earlier, this new hierarchy forces drivers of larger vehicles such as a HGV to acknowledge the threat they pose to all road users higher up in the rankings.

This rule states that when people are waiting to cross (or already crossing) at a junction, then other traffic should give way and allow them to cross. If wanting to turn into the road on which pedestrians are crossing, drivers must wait until they have crossed.

Of course, all traffic must give way to pedestrians who are walking on a zebra or parallel crossing.

Positioning when cycling on the road

For cyclists, there is new guidance regarding where they should position themselves. Drivers should be aware of this guidance, so there is no confusion when sharing the road with cyclists.

On quiet roads, in slow traffic and approaching junctions, cyclists are expected to ride in the centre of the road.

On busier roads, where traffic is likely to overtake them, cyclists are still advised to maintain a distance of at least 0.5m from the kerb edge.

When in groups, cyclists are asked to be considerate of the needs of other road users. This means, for example, not riding side by side on a busy road and making overtaking difficult.

Cyclists can ride 2 abreast however, if they are in large groups or accompanying children or inexperienced riders. However, when there are drivers needing to overtake, cyclists are asked to be aware of this and make it easy for the traffic to pass them by moving into single file or coming to a stop when it is safe to do so.

Overtaking when driving or cycling

When overtaking a cyclist at up to 30mph, drivers must give them at least 1.5 metres of space. They should give more space when passing at higher speeds.

When overtaking horses or horse drawn vehicles, drivers should do so at under 10mph and give at least 2 metres of space.

When passing pedestrians walking on the road (when there is no pavement), drivers should allow for at least 2 metres and maintain a low speed.

The updated Highway Code says that drivers must wait behind these vulnerable road users and not overtake until it is safe and possible to meet these clearances. 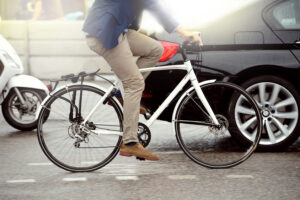 The updated code states that drivers must not attempt to overtake a cyclist within their lane on a roundabout. Drivers should take care to allow cyclists to transition between lanes.

A first for The Highway Code – advice has been included about using a charge point. This addition to the rules comes as electric vehicles become a more popular choice each year. The code recommends parking close to the charge point and not creating a trip hazard with the charging cable.

If you feel it necessary to display a warning sign, you should do so.

When charging is complete, return the cables neatly so that they are safe to use for the next person, and that they do not create an obstacle for other road users.

Will these changes improve road safety?

It’s important to note that legislation isn’t changing. What has changed is the clarification, ensuring that drivers are more cautious of vulnerable road users.

The change in wording means that, if a driver were to cut off a cyclist in a dangerous fashion, law enforcement is more likely to be able to prosecute that driver, as they should have been aware of the rules stated in the highway code that define this type of driving as unsafe.

Andy Cox of the Lincolnshire Police says that these new rules are “game changing”. With many drivers and cyclists equipped with dash cams, rule breakers can be caught even when the police aren’t present. Two-thirds of video submissions to the police are being enforced in London, meaning that it is vital that drivers understand the updated code as to not unknowingly make law breaking decisions on the road.

With this in mind, it is hoped that these updated rules will do a lot to reduce injuries on the roads, especially for more vulnerable users such as cyclists and pedestrians.

Whilst these rule changes certainly have the potential to make UK roads a much safer place, drivers not being aware of these new rules is a big obstacle.

According to research by Slater and Gordon, 23% of surveyed drivers admit to not looking at The Highway Code at any point in the last decade, suggesting many drivers might pass their test and then never remind themselves of the rules of the road!

Additionally, 44% of surveyed drivers said they would turn into a junction if they saw pedestrians waiting to cross as they believe the right of way is theirs – and these 44% were aware that the rules were changing.

It seems that many drivers will have developed habits that will be hard to break, even if they are aware of the new rules.

It remains to be seen whether these new rules improve road safety, or lead to further confusion regarding who has priority.

Are your drivers being safe on the roads?

The best way to ensure your drivers are adhering to the rules of the road is to encourage them to read up on the new rules, and the rules that they may have forgotten since passing their tests.

To further ensure your drivers are being safe on the roads, you could install telematics technology into your vehicles.

Tele-Gence Telematics from Fuel Card Services can provide you with reports around your driver’s behaviour. Are they braking aggressively?  Have they been speeding? Are they turning too sharply? These are all questions that Tele-Gence can answer. You can flag the worst offenders in your fleet and remind them of the importance of being safe on the road. This is especially true for fleets of larger vehicles, who pose a greater threat to vulnerable road users.

Get in touch with Fuel Card Services today, and we’ll start you down the road to becoming the safest fleet in the UK!