Why do drivers use tolls roads in the UK?

Drivers on UK roads are likely to have encountered a toll road at some point. In fact, there are 23 toll roads in the UK, and 18 of those are river crossing. This means that they are often unavoidable.

But why do we have toll roads in the first place, and why do drivers sometimes opt to use them despite the charges?

What is a toll road?

A toll road is a stretch of road that requires drivers to pay a fee for driving on it. The charge per use can vary from 40p to £6 depending on which toll road you are using, what vehicle you are driving and the time of day.

You will encounter toll roads across the UK, but Scotland abolished their toll roads in 2008, so Scottish drivers need not worry about having to pay to drive on their own roads.

To pay a toll, vehicles have to come to a stop at toll booths, or “plazas”. At the booth, drivers are able to pay the charge. They can use debit or credit card – often with contactless payment available. Mobile options such as Apple Pay are being accepted at more UK tolls nowadays, but not all.

Many toll roads are no longer accepting cash as payment, so drivers must ensure they have an accepted payment method ready before starting their journey.

In fact, holders of Shell fuel cards can now use their card to pay the M6 toll, which is one of the busiest, most used toll roads in the UK.

Given that most UK roads are free to use, you might be asking yourself why anyone would be inclined to use a road that requires a payment.

However, toll roads do have certain benefits that, for some, makes paying a fee worthwhile.

In theory, using toll roads will save time. This is great for businesses needing to deliver goods across the country in a hurry. It also means vehicles spend less time burning fuel. It could work out that paying for the toll is cheaper overall than continuously driving on another route and burning a few pounds worth of fuel.

When the M6 toll was in it’s infancy, it was estimated that drivers would save 45 minutes driving near Birmingham if they used the road. However, the amount of time saved is closer to 25 minutes when compared with the non-toll road. The original M6 is well known for build ups of traffic and long delays, however, so you can see why a business might want their vehicles using the toll. 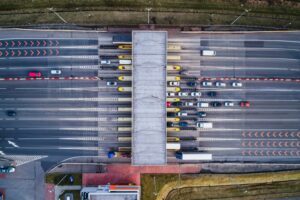 The money from the tolls is used to maintain the rods themselves. This tends to mean that toll roads are very well maintained and smooth to drive on. Compared to a back road that may be covered in potholes that could damage your vehicle and its cargo, this makes a toll road seem like a desirable option.

Can UK toll roads be avoided?

For drivers who are adamant that they don’t want to pay the toll, there are often alternatives. The obvious example of this is the M6 toll, which can be avoided by continuing on the M6 when travelling through Birmingham.

However, the Mersey tunnel tolls near Liverpool are considered to be fairly unavoidable. Other tolls such as the Tyne tunnel are avoidable, but require fairly time consuming details.

As there is no set rule as to whether a toll road can be avoided, it is vital the you plan your routes beforehand. This is especially true if you are sending one of your drivers on a new, unfamiliar route.

Your satnav will probably direct you to a toll road as it is usually the fastest option. If you want to avoid them, make sure you adjust the settings on your satnav. Otherwise, you might find yourself approaching a toll road with no viable alternative.

Sometimes, you can’t avoid going through a toll. For businesses, it might be the difference between getting a delivery to it’s destination on time.

However, this doesn’t mean you need to just sit and watch the money draining from your account. There are things fleet managers can do to negate the toll costs!

We mentioned a fuel card earlier, but they do a lot more than help drivers pay for toll roads! With the right fuel card, you can save up to 10p per litre on fuel. Consolidated HMRC approved invoices also mean you can save a great deal of time on admin too!

You can also improved MPG by 20% with a tracking system such as TeleGence! Consistent reporting and real-time tracking mean you can help to improve the way your drivers control your vehicles. Say goodbye to aggressive steering and braking!

Get in touch with Fuel Card Services today and see how we can help to save those precious pennies for your business!