What is ULEZ and how does it affect London drivers?

The ultra-low emission zone (ULEZ) has been growing in recent years, and the initiative aims to bring cleaner air to millions of people living in and out of London. So, what is ULEZ and who does it affect?

ULEZ stands for ‘ultra-low emission zone’ and has been in London has been in operation since 2019. It’s a legally binding initiative which dictates that drivers of vehicles emitting a certain level of pollution must pay a charge for driving in the area.

This charge is separate to the London Congestion Charge, and drivers operating with high emission within the ultra-low emission zone are likely to find themselves paying both daily charges.

What is ‘ULEZ compliant’?

Whether vehicles need to pay a charge depends on whether they meet certain emission standards, measured from Euro 1 to Euro 6. The charge particularly impacts older vehicles that have a high carbon impact – and the charge naturally applies to diesel and petrol engines rather than purely electric vehicles.

How much is the ULEZ charge?

For cars, motorcycles and vans that do not meet the emission standard, the daily charge for driving in this area is £12.50. Failure to pay the charge can result in a penalty as high as £160.

This does mean that businesses operating in the ULEZ with HGVs are paying hefty charges to operate in this area, especially considering any additional costs put towards acquiring an HGV Safety Permit and complying with the Direct Vision Standard.

Which areas are now in the ULEZ?

Until recently, the ultra-low emission zone has only covered central London.

However, the zone was expanded in 2021, with all areas within the North and South Circular roads are included now included in the low emission zone, meaning any drivers will have to pay the charge in this area if their vehicles do not meet the emissions standard.

This addition means that the zone is now 18 times larger than it was when first introduced in 2019.

However, according to the Department of Transport, as many as 12.7million of the 18.3million petrol cars on the road at the time ULEZ was introduced were already compliant.

Previously there was a 100% discount in place for residents of the Congestion Charge area, but this discount has now ended, and residents will now also have to pay the £12.50.

Drivers of EVs will of course be exempt from any charges. They do not emit harmful greenhouse gases, and therefore do not contribute to the problem that the ULEZ is hoping to tackle.

Most petrol cars and newer diesel cars are also safe from the charge. As a rule, if your diesel car was first registered after September 2015, it is likely to be compliant with the emissions standards. The same goes for petrol cars registered from 2005 onwards. 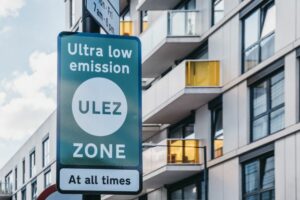 To be exempt from the charges, your vehicle must not exceed a certain level of nitrogen dioxide emissions. Nitrogen dioxide is a harmful gas that damages lungs and makes life harder for sufferers of asthma and lung and heart disease.

What are the benefits of expanding the zone?

The expected result of the expansion is that people will find alternative methods of travel. Instead of driving, they might opt for public transport or simply to walk or cycle.

As a result, Mayor of London Sadiq Khan states that the city will reduce the amount of carbon being emitted by over 100 tonnes, which is equivalent to taking 60,000 vehicles off the road.

Of course, this will have major health benefits for the residents of the expanded ULEZ. The area covered by the expansion is “eight times the size of Manchester” with a population of four million people.

Given that 60% of residents of this area don’t even own a car, the mayor claims it is fair that the air quality of this area is improved. Whilst the environmental benefits are obvious, Khan suggests that this is “an issue of social justice”, as it is the poorest of Londoners who suffer the most because of toxic air conditions.

The move to expand the zone has been met with some criticism, however, mainly due to timing. With many businesses still recovering from the pandemic, their finances may take additional hits due to these new rules. Paying the charge for each of their vehicles every day may prove difficult.

However, transitioning to a fleet of low emissions vehicles may also not be feasible. To make things easier, TfL does offer a grant to businesses; they may receive £2,000 if they scrap their non-compliant vehicles in favour of a cleaner vehicle.

Will your business be impacted by the ULEZ expansion?

If your business operates within the expanded zone, you may find yourself paying the charges if your vehicles are not compliant.

In this case, it’s important to consider what else you can do to save money.

At Fuel Card Services, we offer a range of fuel cards that can help your business save on the cost of fuel- which is a vital expenditure for any companies that depend on business mileage. We also offer a comprehensive suite of commercial fleet services that are designed to save your business time and money through becoming more efficient and cost-effective.

If you’re in the market for a fuel card, you can use our handy card selection tool to find a card that fits your fleets needs, based on factors like size, vehicle type, and the benefits that are most helpful to you. Additionally, our Tele-Gence tracking software could improve your MPG by up to 20%, helping you get more out of every litre of fuel.

If you think your fleet could be doing more to save on costs, get in touch with our dedicated team today.

Cars are the most common type of vehicle used by commercial fleets in the UK, and these can be owned either by a business, or owned by and employee and...

Where can drivers park on the road?

Many businesses use drivers to make deliveries. Whether it's food or parcels, the UK lockdowns saw the rate of deliveries increase quite dramatically. With more drivers making deliveries, this means...

Does driving an electric vehicle help to protect the environment?

Friday 22nd April is Earth Day! It's a day devoted to supporting environmental protection, so there's no better time to start thinking about what we can do to combat climate...