Can the UK energy grid cope with more electric vehicles?

As the UK adopts more and more electric vehicles, there have been questions regarding the country’s energy grid, and whether it can handle the increased strain.

This is a huge increase in the adoption of plug-in vehicles, and the country is expected to continue transitioning to low emissions vehicles at a faster rate each year. With that in mind, it is understandable why concerns have been expressed in regard to the energy grid.

Is the grid prepared for millions of people charging their vehicles, all across the country?

Why is the UK adopting plug-in vehicles so quickly?

Of course, climate change is the primary drive behind this transition. The transport sector accounted for 27% of the country’s greenhouse gas emissions in 2019.

If we are to reach our climate targets, the transport industry will have to reduce its reliance on fossil fuel burning vehicles and join the EV fleet. They will have to do it quickly too. A report by the CCC estimates that we will need 23.2 million EVs on road by 2032 in order to stay on target.

Whilst we are currently behind this target, it may still be possible thanks to new government policies.

As part of the Prime Minister’s ten-point plan for a green industrial revolution, measures have been put in place to accelerate the shift towards zero-emissions vehicles. These measures include the 2030 ban on the sale and production of petrol and diesel vehicles.

With this ban less than a decade away, many drivers are making the choice to adopt EVs sooner.

There are also grants available from the government to help purchase a plug-in vehicle. The amount offered in the grant depends on the type of vehicle. The government will pay for 35% of the full price of an electric car up to a maximum of £2,500.

Other grants exist, such as the workplace charging scheme, to financially assist businesses looking to install electric vehicle chargers in their places of work.

So, with a massive shift happening on the UK’s roads, how will the energy grid be affected?

Does the energy grid have the capacity to support more charging?

According to National Grid’s project director, it is expected that electricity demand would increase by 10% if the entire country switched to EVs overnight and started charging.

Some might argue that 10% is a huge increase. However, increased reliance on off-grid energy sources such as solar panels has helped the country to rely less on the energy grid. In fact, the UK’s peak demand has fallen by 16% since 2002.

Basically, if we all started charging our cars today, we’d still be putting less strain on the energy grid than we were 19 years ago! 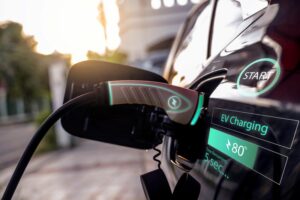 When is the best time to charge my vehicle?

Whilst the grid could certainly handle the demand if all vehicles were charged at once, this would be less efficient.

The grid sees the most demand between 6pm and 10pm. This is when most people return home from work; they’ll be switching lights on as it gets dark and using appliances.

When someone returns home from work, they will likely put their vehicle on charge straight away.

However, this may not be ideal. Having peaks and troughs of energy demand isn’t as efficient as having a balanced demand throughout the day.

Currently, the grid’s peak demand is between 6pm and 10pm, but then this quickly drops as people go to sleep. Overnight, demand is much lower than average. This means certain systems must be turned off, in order to not supply too much power to the country.

Therefore, the best time to charge your electric vehicle may be just before you go to bed. If cars were left charging from 10pm to 6am, this would fill in the huge gap in demand. Night time charging would also mean there isn’t an increased strain on the grid during the peak hours, which already require a lot of power.

When the demand is more balanced throughout the day, the system works more efficiently, meaning electricity costs will actually be lower for the consumer.

Are you ready for electric vehicles?

The UK seems to be well prepared for the changes ahead. When will you be making the transition? Are you a fleet manager considering adopting a fleet of EVs?

We are now offering the Shell Electric Vehicle Fuel Card, which means you can continue getting the benefits of a fuel card once you’re using EVs. You’ll save 2p per kWh, and you can continue using the card to pay for regular fuel.

Get in touch with Fuel Card Services today to see how we could help you. We can keep your fuel and charging costs low, and our fleet management services are to help your fleet work at maximum efficiency.

Fuel plays a major role in the UK economy. It’s a core component of the transport sector, which saw 176 billion tonne-kilometres of domestic freight transported in 2020. A whopping...