Catalytic Converter Theft: What It Is and How to Avoid It

A worrying new statistic shows that catalytic converter theft has risen by over 100% since 2019. This is a growing problem UK, as well as several reports of similar crimes in other countries such as the US.

If your catalytic converter were to be stolen, it would be an expensive problem to solve. What can you do to stop this from happening and avoid the hefty repair fees?

Why do people steal catalytic converters?

Catalytic converters are targeted for the precious metals that are used to make them. The price of these metals has been soaring since 2019, making them an ideal target for thieves.

Depending on the metal used in the converter, thieves could sell a stolen catalytic converter on for over £200. Since they are not difficult to steal, it’s easy to see why they are being targeted. However, to replace a stolen converter could cost as much as £1,000.

Owners of hybrid vehicles need to be extra vigilant. Figures from Which? show that among the most commonly targeted cars for catalyst converter theft are Toyota Prius, Toyota Auris, and Honda Jazz; all hybrid cars.

Since the converters on hybrid vehicles are used less, the metal corrodes slower. This, and the fact that hybrid vehicles tend to be newer to the market, means that thieves are keen to get their hands on these clean, undamaged converters. They’ll get a better price for the undamaged scrap metal.

How to prevent your catalytic converter from being stolen

1. Park in a safe and well-lit area

Firstly, consider whether you could be parking in a safer place. For many, roadside parking is the only option. In this event, it is advisable to park in a well-lit area that thieves would avoid out of fear of being seen.

If possible, avoid mounting the curb when you park. The raised angle actually makes your vehicle an ideal target for catalytic converter theft. Thieves will have easier access to the underside of your vehicle.

On a similar note, parking close to a wall, fence, or right up against the curb is another way to make the underside of your vehicle difficult to access.

Of course, the safest parking option is a locked garage. However, this is a luxury that many don’t have. Therefore, it saves to apply the above cautions when parking your vehicles.

If possible, avoid mounting the curb when you park. The raised angle actually makes your vehicle an ideal target for catalytic converter theft, providing thieves with even easier access to the underside of your vehicle.

On a similar note, parking close to a wall, fence, or right up against the curb is another way to ensure thieves can’t access underneath your vehicle.

A great way to deter thieves is to install a car alarm. If a thief begins tampering with your car and sets off an alarm, the chances they will stick around to finish the job are very low.

If you have no choice but to park on the road, this is a great option. In residential areas, your neighbours will also be made aware of the tampering – thieves will not likely return in a hurry.

In fact, installing a car alarm can grant you a discount on insurance premiums. They reduce the chances of having your car broken into or tampered with, which helps to keep your insurance record clean.

Whilst not commonly advertised compared to a car alarm, there are tools available to mark your property forensically. Smart Water, for example, is a liquid that marks your property with a forensic code. At first glance, this may not sound like a preventative measure for catalytic converter theft.

However, police can use this code to trace the property back to you – and criminals know this. Research has suggested that 74% of thieves will be deterred from attempting to steal from a property that bares a Smart Water logo. You can place the logo in the windows of your vehicle. Thieves will see it and realise that your catalytic converter might be forensically marked and not want to take the risk. 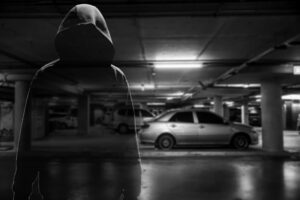 5. Weld your converter to the frame

Most catalytic converters are attached to the vehicle with bolts, making theft fairly easy with the right tools.

To combat this, it is possible to have a mechanic weld the converter onto the frame. This doesn’t make it impossible to remove, but very difficult without specific tools.

However, it is suggested that welding the converter directly onto your vehicle can cause issues. The device won’t be able to freely vibrate as the vehicle moves, which could cause strain on other parts of the chassis.

Shields or cages are available that can be fitted to the underside of your vehicle that encase the converter, making it very difficult to steal.

The CatClamp, for example, surrounds the converter in thick wires. In addition, it locks the converter to the chassis in up to 7 places, making it very frustrating for a thief to remove. It is available in different models, and can be fitted to different sized and shaped converters.

Catloc, on the other hand, encases the catalytic converter in a metal casing to prevent theft. It is recommended by UK police forces, and also approved by 6 international vehicle manufacturers.

With a telematics services such as Tele-Gence, you’ll get an added layer of security and peace of mind.

The technology fitted to your vehicles (which links seamlessly with your fuel card account) will notify you of any out-of-hours activity or signs of tampering.

If your vehicle is stolen, the on board tracking would notify you of its position. This makes catching the thief a much easier job for the police. It should also speed up the process of getting your vehicles back, reducing down time and maintaining a steady income.

Get in touch with the Tele-Gence team today, and find out how you could keep your vehicles safe and secure, as well as plenty of other benefits.

Sometimes it good to go back to basics. If you have recently switched to an electric vehicle or want a recap on how to charge an EV, this guide will...