Should vehicle stopping distances be updated in 2022?

Whether you are studying for a theory test or have been driving for many years, it’s important to know your vehicle’s stopping distances.

However, the distances stated in the Highway Code have been the same for many years despite advancements in braking technology – does this mean they should be changed in 2022?

Why is knowing stopping distance important?

Drivers should know how long it will take for their vehicle to come to a complete stop. This will help prevent accidents, especially when driving at high speeds.

The distance doesn’t just include the time it takes for your brakes to stop the car. You must also consider that you will take a moment to react to a hazard. This extra time is referred to as thinking distance.

How to minimise thinking distance

Of course, keeping your reaction time as short as possible will mean you are able to stop quicker in an incident.

Make sure to minimise distractions in your vehicle. Whilst a sat-nav may be a necessity, having your mobile phone in view could be potentially fatal if a message pops up right before the traffic ahead comes to a sudden halt.

Also, do not drive if you are overly tired. Lack of sleep affects driver attention and awareness. 1 in 8 drivers even admit to falling asleep at the wheel at some point. The implications of this can of course be deadly. Take breaks during long drives, and ensure that you are not going over the 9-hour limit if you are driving for work.

It goes without saying, but the AA points out that drivers should also avoid consuming any intoxicating substances such as alcohol, as reaction times are severely affected.

What are the braking distances in normal conditions?

According to the Highway Code, these are the distances your vehicle will travel before coming to a stop at certain speeds:

With this in mind, a driver moving at 30mph should keep at least 23 metres, or the length of 6 cars, between them and the vehicle in front. That way, if the vehicle in front suddenly stops, the driver behind should have enough time to come to a halt.

What about rainy or icy conditions?

As you would expect, the distance your vehicle will go before stopping is greatly extended when weather conditions are affecting the road.

Stopping distances in rain are expected to be doubled when compared to dry conditions. When driving in the rain at 30mph, for example, your vehicle will go 28 metres instead of 23 before stopping. Your thinking distance shouldn’t change depending on the weather, hence the distance not doubling to 46 metres. You should take extra care when driving behind another vehicle in rainy conditions. 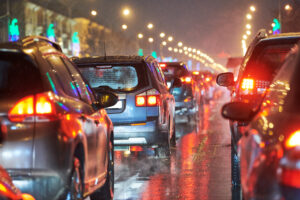 Should these stopping distances be updated in 2022?

For some years, however, experts have been calling for the government to update the figures in the Highway Code regarding braking time. TRL determined that the figures rely on our thinking time being 0.67s, which they believe to be wrong.

They estimate that our brains actually take 1.5s to react to any hazards. This is the figure that the American version of the Highway Code uses. In Canada, it’s even longer at 2.5s.

The 0.67s figure also relies on drivers being 100% focused. This is much more difficult now than it was when the Highway Code was written. There are plenty of distractions facing drivers in 2021, and it is argued that these should be accounted for.

However, it could be argued that the distances in the Highway Code are actually longer than necessary given the advancements in vehicle technology. You can find evidence of people arguing in the early 2000s that the figures were out of date then, saying that they were a huge overestimation due to car technology improving. If that is the case though, it’s still better to overestimate and be safe!

How long do EVs take to stop?

On the other hand, the stopping distance of electric vehicles has come into question in the past. Since EVs are likely the future of transportation, it is worth understanding if they are slower to stop than a typical ICE vehicle.

In 2019, it was generally agreed that electric vehicles are roughly 20% heavier than a petrol vehicle because of the size and weight of their batteries. As battery technology improves, this may become less true over time.

With that in mind, you can expect a little extra stopping time in an electric vehicle. Consumer Reports’ tests showed that electric and hybrid cars travel 42 metres (138 feet) after braking when travelling at 60mph on average. This is similar to a large SUV or a minivan. However, that figure is still quicker than the figures from the Highway Code.

The same tests showed that small and midsized ICE cars travelled around 10ft less than electric vehicles when braking at 60mph. This does support the theory that the distances in the Highway Code are somewhat out of date now.

Do HGVs take longer to stop when braking? 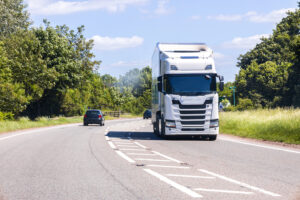 Even though a lorry tends to have more contact with the road given their extra wheels, they are much heavier than a regular vehicle. That extra weight means HGV stopping distances can be up to 50% more than a car.

A car that brakes after travelling at 60mph will take 73 metres to stop. A HGV is more likely to take around 100 metres. Lorry drivers should be conscious of this fact as their sheer size already makes them a dangerous entity on the roads. If it is raining, a HGV could take 200 metres to stop, and would cause a great deal of damage to smaller vehicles.

Whatever vehicle you are using, it is vital that your vehicles stay well maintained in order to keep everyone safe on the road. You may know your braking distances off by heart, but if you’ve got faulty or worn out breaks, they’re going to be much longer!

With MyService.Expert, we make vehicle maintenance quick, easy and convenient. Pre-negotiated rates with thousands of main dealers and independent garages across the nation mean you have accessible servicing and maintenance whenever you need.

Get in touch with the dedicated team at Fuel Card Services today and see how else we can save your business time and money.

Make the most of rental vehicles

Businesses might choose to lease their vehicles rather than purchasing them as it can have many financial benefits. How can businesses ensure they are doing their best to save money...

Can you use a fuel card to charge electric vehicles?

The UK’s transition towards zero emissions means that businesses are going to be turning to electric vehicles to fuel their operations. Why, then, should a fleet manager stick to using...

The cost of new vehicles is always a huge factor for fleet managers to consider. It can require capital investments worth thousands of pounds, which can have a serious impact...