There are plenty of monetary benefits to owning an electric vehicle, but how does their depreciation compare with ICE (internal combustion engine) vehicles?

As EVs become more popular, it can be interesting to compare their performance and costs with ICE vehicles. When deciding whether you want to make the transition to an electric vehicle, depreciation is just as important to consider as performance, range and charging costs.

Depreciation refers to the loss of value of a vehicle as soon as it is sold. The decrease in value begins the moment you drive it.

High mileage, damage and lower demand are some of the top causes for this loss of value.

Also, when buying a new car from a dealership, you’re paying a lot of extra money on top. Even if you sold the car back to them the next day, you’d be at a huge loss.

According to the AA, the average new car could lose between 10% and 40% of its value in its first year on the road. Assuming you’re doing plenty of miles, the car will have depreciated by 60% after three years.

Can owners of electric vehicles expect to encounter the same dramatic price reduction?

Due to the lack of demand, EV depreciation has been pretty extreme in the past. There weren’t many people looking to buy used electric cars as the technology advances so quickly, making older cars obsolete quite quickly.

Now, however, the market for electric cars has increased massively.

This is probably due to the fact that car owners no longer see ICE vehicles as a sensible investment. The government plans to ban production and sale of new petrol and diesel cars in 2030. With this deadline approaching, many drivers are considering an electric vehicle as their next car.

Similar factors are also pushing more drivers towards EVs. Many cities are adopting low emission zones, including London, Birmingham, Oxford and Bristol. Drivers are keen to get their hands on an electric vehicle as they are exempt from the charges that come with these zones, making EVs a great option for cities.

On top of this, statistics show that many drivers could be saving a huge amount of money on fuel costs if they were driving an electric vehicle. Since charging with electricity has become cheaper than filling up a vehicle with fuel, it is possible to save hundreds of pounds every year depending on your mileage. 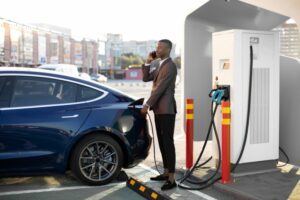 So what rate of depreciation should an electric vehicle owner expect? Is it any better than the 60% price reduction seen in ICE cars?

Of course, it depends on the vehicle. Brands such as Tesla, Mercedes and Porsche claim to be subject to the least depreciation. The Porsche Taycan for example is calculated to lose only 23% of its value over 3 years.

However, the Taycan is an extreme example. Statistics suggest that EV drivers can expect their vehicles to depreciate by around 50% over 3 years. The Volkswagen e-Golf will lose around 49%, whilst the BMW i3 will lose 52%.

That figure is an improvement on the 60% depreciation seen by ICE car drivers. It’s not a vast difference, but depending on the specific vehicle you buy, you could end up retaining thousands of pounds when you go to sell your car.

Along with the lower total cost ownership (TCO), the less extreme depreciation is another financial benefit to owning an electric vehicle.

What causes the depreciation of EVs?

There are other factors outside of your control. For example, your brand of vehicle could develop a negative reputation; people might believe it is not a reliable vehicle. In this case, you’re going to get less money for it regardless of how well maintained it is. If a newer model of your vehicle is made, your vehicle is likely to depreciate, as there will be more demand for the newer model.

It looks as though depreciation isn’t something that EV owners need to be worrying about for the time being. As the transportation industry adopts electric vehicles more and more every year, their demand is likely to increase.

If you are considering transitioning to electric vehicles for your fleet or business, get in touch with our expert team today and find out how you can keep costs to a minimum during this process.